(May 29, 2020) – This week’s Friday Feature looks back at the formation of the Jr. Late Model Series, a growing phenomenon across the nation but started by Madera Speedway in 2016. The series for drivers ages 10-16 years old has produced multiple quality drivers, quickly making an impact on stock car racing. Photos by Jason Wedehase

Although other series had catered to the youth movement throughout the late 90s and into the early 2000s, none were using asphalt Late Models and none included drivers as young as ten years old competing. The FASCAR Pro Truck kids divisions in Florida and the USAC Ford Focus Midgets included drivers as young as 12. Some well-known competitors such as Mark Martin’s son Matt, Super Late Model driver Anthony Campi, and XFINITY and Truck Series driver Joey Coulter honed their careers in the Florida kids truck ranks.

Getting youth into Late Models was simply a dream in California when the first iteration was attempted in 2008 at Altamont Raceway Park. Although only three drivers competed that year, it was a starting point. The closure of Altamont along with the economic downturn put the idea on the back burner for many involved.

Several factors led to the timing for the 2016 launch of the 51FIFTY Jr. Late Model Series. The region had a large influx of second and third-generation drivers along with several younger siblings of current Madera Late Model drivers looking for a place to race. An exceptional crop of Bandolero champions was also ready for the next step but too young to go Late Model racing.

“There was such a demand on our youth to be better faster. I spent a lot of time kind of roaming around and there were just certain kids I was around where I saw super talented young drivers,” Madera promoter Kenny Shepherd said. “The magic of the Juniors is having kids who have won, put together (on the track) to see who the real stars are.”

After a strong response to the initial announcement in the fall of 2015, the moment arrived on March 12, 2016. A field of 13 Jr. Late Models, utilizing the same equipment as the Pro Late Models but with a restrictor plate, drove off into turn one with MAVTV cameras rolling. The 50-lap contest had its ups and downs including a crash on the first corner of the first lap. But 13-year-old third-generation rookie Austin Herzog claimed the victory and his place in the record books as the inaugural winner.

The division continued to pick up steam as Austin Edwards, age 11, won the second round in April. The championship picture developed between Austin Herzog and Las Vegas’ Dezel West with Herzog earning a late-race victory.

Perhaps the exclamation point of the season came a few weeks later on June 17. Herzog swept around the outside of Ryan Vargas as the white flag flew, taking his third victory out of the first four races in the series. A few hours later, his father Bryan claimed the checkered flag in the Pro Late Model feature for historic father and son Late Model wins on Father’s Day Weekend.

Interest in the division intensified as the televised episodes began to air in the fall. The 2017 season saw USAC Ford Focus standout Jesse Love move over to the Jr. Late Models, teamed with Hailie Deegan in the Naake Klauer Motorsports stable. Love won the championship as a rookie while Deegan was denied a win that season – a sign of the competitiveness of the series. 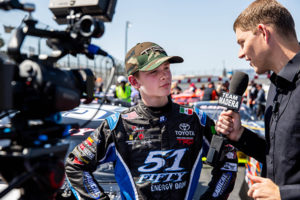 Love’s 2018 championship was no gimmie, as the battle for the lead swelled with the addition of Las Vegas’ Tanner and Tyler Reif and Napa’s Dylan Zampa. Love persevered for a narrow championship win and completed his Jr. Late Model career with eight victories followed by Herzog’s six victories.

“(Jr. Late Models) helped me out a ton. It was a big transition. I was really grateful to be able to get a lot of laps and learn a lot,” Love said. “Being able to learn a ton of different lessons before you go into a Super Late Model in a higher series; I feel like the Jr. Late Models provides a lot of benefits for drivers looking to go into full-sized stock cars.”

Madera’s Joey Iest became the heir apparent for Mike Naake’s team in 2019. Iest successfully won the team’s third consecutive championship despite pressure from Bakersfield rookie Seth Wise throughout the year. Since its inception, the series has consistently averaged 16 cars per event including nearly 20 cars per event last season.

The impact of the series on the motorsports industry has been unprecedented for a four-year run. Notable graduates include Jesse Love: 2018 BCRA Midget champion and driver for Bill McAnally Racing in the ARCA Menards Series West in 2020. Hailie Deegan: three career NASCAR K&N Pro Series West victories and a 2020 championship contender in the ARCA Menards Series. Ryan Vargas: three career NASCAR XFINITY Series starts. Austin Herzog: 2019 Madera Nut Up Pro Late Model champion with a career-best finish of second in the SPEARS SRL Southwest Tour. Dylan Zampa: winner of Madera’s $5,000 to win Pro Late Model season opener in 2019. In both 2019 and 2020, seven of the top 100 drivers in the Speed51.com Short Track Draft had regular experience at Madera as well.

This year Jr. Late Models will compete at Roseville’s All American Speedway, in the CRA Jr. Late Model Series, in the Northwest in the Mountain Dew-sponsored touring division, and with weekly competition at Meridian Speedway. Madera Speedway will continue to be the epicenter for the class with its first televised race tentatively scheduled for June 27.

Races from the first two seasons of the series are available on ShortTrackTV on YouTube with a complete series archive available at LucasOilRacing.TV