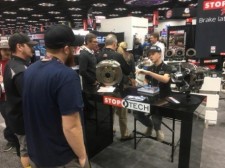 The first week of December 2017 held a busy week for many racing enthusiasts, drivers, and companies during the Performance Racing Industry (“PRI”) trade show in Indianapolis, IN. Among the attendees were K&N Filters of Riverside, CA and Jesse Love of Love Motorsports, Inc. and Jesse Love Racing from Redwood City, CA.

K&N Filters were in attendance with a large display, meeting with racing enthusiasts, discussing products, distributing samples, and continuing the legacy of the formidable and established company. Jesse Love was in attendance for multiple autograph-signing sessions for companies, including JRI Shocks and StopTech brakes.

Although you may have stopped by the K&N booth or grabbed an autograph from 12 year stock car and USAC Midget driver sensation Jesse Love, you probably didn’t see the meeting between Love and K&N that took place at the PRI show. Love and K&N met to discuss a sponsorship arrangement for Love’s impacted 2018 racing schedule which includes stock cars, midgets, and sprint cars. The meeting ended with a sponsorship arrangement between K&N and Love.

“I am very excited to be driving with the support of K&N,” said Love. “They are such a fantastic company with a great brand, and it will be an honor to promote K&N throughout the 2018 season.”

“We see Jesse Love as a distinguished up and coming talent in both late model stock cars and USAC Midgets,” said Kirk Swanson of K&N Filters. “We have watched Jesse’s championship seasons for the last two years in USAC and wanted to show our support. We have also been impressed with the way Jesse carries himself and conducts his interviews. We believe that he will do a great job promoting K&N.”